Peregrine. Just about. We thought it was likely an adult male. 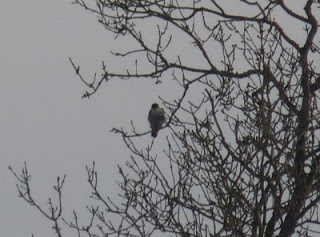 A suitably festive scene at Lowthorpe Church. Two Grey Squirrels darted out of the big Yew by the chuch door! 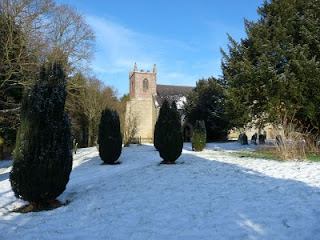 Sunday morning looking toward Lingholmes. Is this the most snow in Kelk in the Noughties? 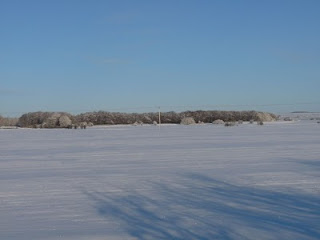 I'm delighted with this shot. Not only lucky to get a picture of a Kingfisher but the composition is really pleasing. 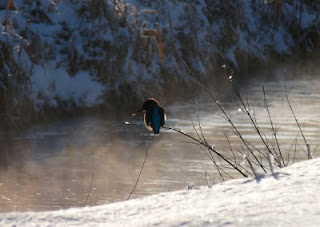 Grey Wagtail feeding beside Kelk Beck - one of five or six seen over the weekend. The banks of the beck had pretty much the only greenery on show. 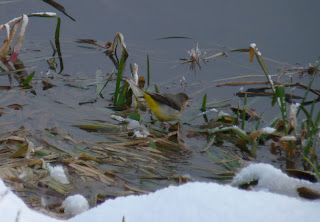 Life in the Festive Freezer

Brrrr. It was hard work tramping through the thick snow but completely worth all the effort, a lovely end to the year for me. My only regret being unable to hang around for another day or two. Booo!

About an inch of snow lay on the ground from Friday and hedge bottoms and shaded areas were still free. On most fields you could see crops poking above the snow so although difficult for birds many had not been forced out yet. However the keen frost over the latter part of the week had clearly pushed some birds closer to open or running water such as the beck.

We started as normal in the morning with the Harpham-Lowthorpe walk. The wild open area to the east of Lingholmes to the village was suitably productive with 2 Lapwing, 16 Stock Dove, 1 Meadow Pipit (unusual, probably a recent arrival), 1 Redwing, 4 Mistle Thrush, a Jay in the plantation, Bullfinch and 3 Yellowhammer.

A couple of Skylark headed over south - the first of 30 or so over the weekend visibly migrating away from the harsh conditions - and then before we got to the church a flock of 74 rose up from the next field. They came down again quickly but I would guess they moved off on Sunday following the heavy snow at night. A total surprise to find this many together.

To top it off an adult Peregrine was sat in a nearby tree - now known as the Peregrine tree since we had one in the same tree two years ago! It didn't seem like a big bird so was probably a male. I managed a photo which I will post later.

Moving along to New Road it was fairly quiet but still 8 Teal, 12 Lapwing heading south, a Snipe, a Woodcock, 19 Collared Dove in the farmyard, 2 Grey Wagtail, 1 Tree Sparrow and 5 Yellowhammer.

In Lowthorpe Church wood a pair of Moorhens were scratting around the edge of the frozen pond - I wonder how long they'll stick it out? A Woodcock flushed from the roadside and a Great Spotted Woodpecker was 'tchicking' away loudly. In the churchyard two Grey Squirrels came scampering out of one of the yew trees - there's definately more around in the last few years. I wonder if this is due to changes in 'keepering?

The remainder of the walk saw a Mute Swan, Sparrowhawk, Kestrel, 3 Snipe, another Meadow Pipit, a Grey Wagtail on Lingholmes Beck, 6 Long-tailed Tit and 2 Bullfinch. In total I estimated that we'd seen 20+ Robins around Lowthorpe as well as at least 8 Song Thrush.

Short days. Bah. A quick shuffle around Gransmoor Lane and Barf Hill before dusk produced a single Greylag north, 4 Teal and 31 Mallard, 8 Grey Partridge, 3 Cormorant heading SE, 1 Buzzard being mobbed by crows, 3 Snipe, 27 Fieldfare and at least 16 Hare. A Tawny Owl hooted a couple of times just as I was taking my boots off back at base camp.

Not long after sunset on Saturday it started snowing and continued until well into the night. By morning there were several inches of very powdery snow. It has been a while since there was this much across the area.

Heading off down Kelk Beck in the morning was a delight... but tough on the feet. One of the first sightings was a big Sparrowhawk making off with a Fieldfare - good to see at least one bird benefitting from the harsh weather.

As well as this impressive tally were a Peregrine hunting pigeons, a Merlin - quite large/brown so probably female, Snipe all along the beck (31 noted but some double counting), 3 Kingfisher, and a good count of 24 Yellowhammer. I didn't get a good look at the Peregrine so couldn't age/sex it. I guess it could have been the same one as yesterday but what is more likely, a second bird or seeing the same one twice two miles apart?

On the way back 6 Greylags headed south and 8 Fieldfare and 2 Mistle Thrushes were around Lynesykes Lane. Very few gulls were seen over the weekend, the only large gulls were a single Herring Gull and 5 Great Black-backed Gulls, all adults all headed SW.

A set of Fox tracks went along the bank for several hundred yards and many Rabbit/Hare tracks were noted everywhere in the snow right across the area.

Snow set in again in the afternoon but I managed an hour or so to whizz by Kelk Lake. Very little on show, as expected, but 2 Gadwall, 4 Tufted Duck, 11 Coot, 4 Snipe. Also a Woodcock flushed from the roadside, a Grey Wagtail on the roof of the turkey farm, 18 Tree Sparrow and 2 Bullfinch. The Grey Wag was the sixth of the weekend, though could have been the one from Lingholmes Beck yesterday - either way a very high number locally and perhaps evidence of a hard weather influx.

Another year gone. Can't wait for January!
Posted by Bob at 21:29 No comments:

Views of Roe Deer are sometimes close and sometimes prolonged but rarely both at the same time. This one had appeared in view as we crossed a ridge and no sooner had I got the camera ready than it had popped through the hedge and gone. Actually there were two together but the first had moved before I was ready. 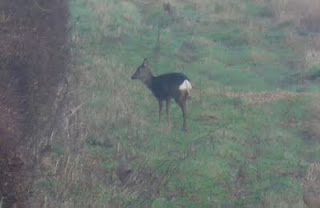 One of the local Sparrowhawks has been busy! 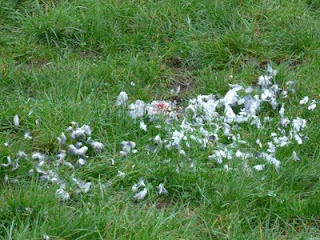 I don't know the first thing about mushrooms but - what a beauty! 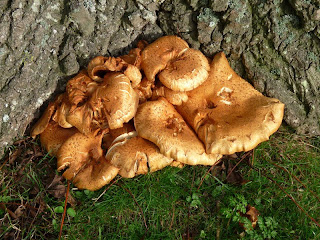 Everyone's favourite garden bird, shame about the quality of the photo. 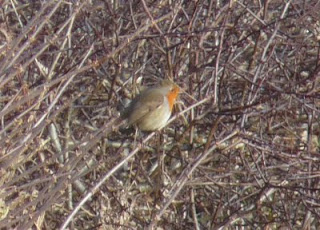 Opportunity knocks - not the easiest bird to photo without the benefit of a hide. This fine adult was in the beck just above Lowthorpe Bridge when we got to it. Just allowed enough time to get a few snaps before getting spooked. A Kingfisher also zipped past but I completely missed that. 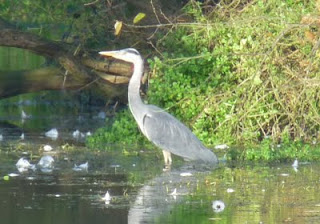