The highlight of the weekend was this juvenile Cuckoo by Kelk Beck - but you'll have to trust me on this picture - actually you can just make out the white spot on the nape. The bird flew off seconds after this shot. 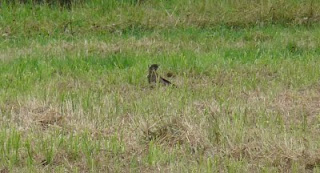 Ah, that's better, definitely a juvenile Cuckoo, looking very rusty brown. Hard to believe it's the same bird as the one above. Anyway, a very very good find and a special encounter. 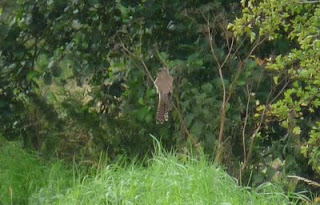 Juvenile Pied Wagtail - this one landed a few feet away and stood motionless with its beak open and eyes closed for a while until its Mum's alarm calls persuaded it to fly back up to the rooftop. 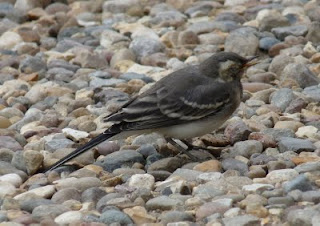 Canadas and Greylags getting on like a house on fire - no one told them they're supposed to bicker! And what are they doing on the beck, they never do that?? 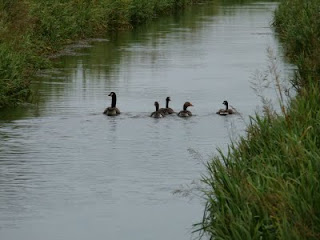 A couple of Hares which had just scarpered across the field - could have had a nice close up but spooked them getting my camera out. Doh! 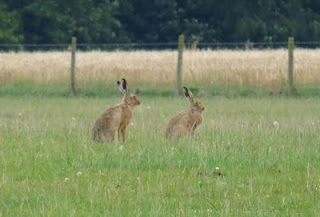 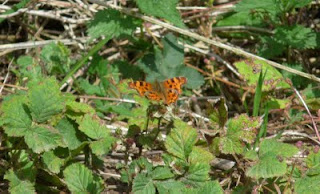 Meadow Brown - loads of these about at the moment esp along hedgerows, many in looking even more worn than this one. 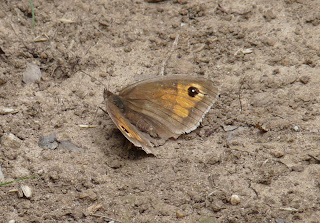 After the invasion of Painted Ladies in May there are now fresh looking individuals. This one was pristine and so bright it hurts! 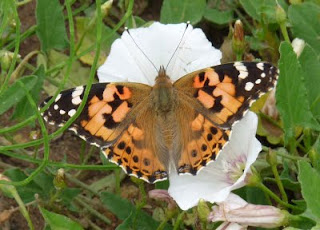 Speckled Wood at Barf Hill. Not a common butterfly but fairly widespread. Looking good, er, apart from missing part of the right forewing! 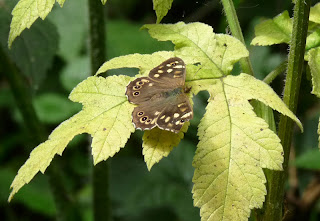 July being quiet is beyond cliche - but you if you don't look etc. Last weekend was my monthly visit to Kelk, and, yes, it was rather uneventful. A few highlights to keep the enthusiasm ticking, the main interest seemed to be catching sight of juvenile birds. Otherwise I spent my time chasing, literally, butterflies, trying to take pictures of critters that wouldn't stay still. I have a lot to learn!

Top billing was a juvenile Cuckoo, my first locally for a long time. Also two juvenile Kingfishers, two families of Kestrel and Tufted Duck, one brood each of Grey and Red-legged Partridge. Also, a Hobby, some wader passage and a few notable passerine flocks.

Morning: Kelk Lake - a ghost town apart from a pair of Mute Swans, 2 Mallard, 1 Little grebe, 1 Common Buzzard over the wood was the only one seen all weekend, 9 Coot (2 broods = 5 young), 1 Kingfisher, and 3+ Reed Warblers heard. 6 Mistle Thrush were in the grass field by the turkey farm.

Onward to Harpham via Lingholmes - 1 Hobby over the wood briefly, 1 female Sparrowhawk and a Bullfinch. At Harpham 3 Kestrels around New Road including a female encouraging a young bird to try hovering. Also 1 Lapwing, 300+ Common Gulls and a few Black-headed Gulls including at least two juveniles, plus 2 Mallard. Really, that was the most bird-free morning out I've had in a long time!

Afternoon: somewhat better. At Gembling 2 Kestrel, 8 Lapwing, 95 Feral Pigeon, a Great Spotted Woodpecker, and a Sedge Warbler. Encouraginly there is still some trace of wet patches adjacent to the drain so perhaps some small floods will form through autumn and winter.

Brigham Quarry - 2 mallard, 3 young Pochard but no sign of the adults, a female Tufted Duck with 5 young ducklings, 6 adults plus 4 broods of Little Grebe totalling 13 (5+3+3+2) or 19 birds, is very pleasing indeed. Also 17 Coot (3 broods, 7 young), 400+ Common Gull with a small number of Black-headed Gulls nearby, and an exceptional count of 390+ Swift between Cruckley and Carr Farms (largest count for me this decade).

On the return through Great Kelk two flocks of House Sparrows totalling 70+ birds and a Great Spotted Woodpecker heard in a garden. Around Gransmoor Lane were 2 Mallard, 3 Kestrel (probably 2 juveniles and a female) together near Barf Hill, and an adult Great Black-backed Gull, an odd sight in summer. 13 Canada Goose were noted flying over toward Kelk Lake.

I took another quick look at Kelk Lake but the only addition was a flyover Grey Heron (heading east). No sign of the canadas.

Morning: a moderately eventful stroll along Kelk Beck - 2 Greylags and 3 Canada Goose together on the beck was most unusual and will prove it with a picture later, 8 Grey Partrige (6 chicks), 1 young Coot, 370 Lapwing on a freshly cut pea field is a good count for July, 1 Snipe off the beckside, 130 Wood Pigeon in one flock, 2 Skylark, 1 Meadow Pipit, 3 Yellow Wagtail, also on the pea field 250+ Rook, 110+ Jackdaw and 80+ Starling. Elsewhere 96 Linnet in two flocks.

However the highlight was the juvenile Cuckoo that showed well on the ground, perched, and in flight. A long time since I managed to pin one of these down - fairly unfamiliar to many birdwatchers. It was supported by the sight of three Kingfishers one straight after the other south along the beck - wow! - looked like two juveniles and an adult but the view was typically brief.

Further along around Cattleholmes were 2 Mallard, 1 female Tufted Duck with one young, 6 Coot (3 young), 1 Green Sandpiper, 2 Golden Plover, and 2 Reed Bunting. A Water Vole crossed the beck. On the way back in Little Kelk - 8 Tree Sparrow and 1 Great Spotted Woodpecker.

Not a lot of time for birding in the afternoon, plus rain stopped play. Anyway, 8 Hares were in the grass field off Green Lane, a Grey Heron off Gransmoor Drain and two lots of Red-legged Partridge totalled 19 including 13 young - there are some grain feeding stations nearby so these birds may have been introduced. A Sedge Warbler singing along the drain near Barf Hill.

And that was that. No additions to the year list this time.

Oh wait, butterflies... most numerous by a long way were 'Whites', loads everywhere, the majority were probably Large Whites but some Green-veined and I think a few Small Whites. Meadow Browns were widespread some hedgerows held lots, e.g. 20+ along half of Green Lane.

A dragonfly was whizzing up and down Lingholmes and there were two at Brigham Quarry - I'm not sure what they were but presumably Southern and/or Migrant Hawker.
Posted by Bob at 23:43 No comments: