In previous recent years I've tended to make a mid-month visit in April in an attempt to get some early dates for passerine migrants. Which has, pretty much, done the job. However this means I always miss out on an April Swift. I never quite managed to catch one when I was watching the area years ago either so I decided to rectify that by taking a day off for a long weekend to get the last drops of the month.

What an absolutely rubbish day - rain from early morning until 6pm. We managed a couple of hours as soon as it stopped. A brisk walk around Gransmoor Lane revealed 8 Grey Partridge, 1 Cormorant, 1 Buzzard, 1 Kestrel, 2 Lesser Black-backed Gull, 16 Herring Gull, 1 Barn Owl, 9 Swallow and a Yellow Wagtail.

Bright sunshine... hard to believe after the previous day.

Last effort for the weekend was a quick dash on the bike to Harpham and back which added 1 Swift, 1 Kingfisher, 2 House Martin and a Speckled Wood butterfly. Best of the lot was an excellent view of a Hobby - my first record for April.

A male Yellowhammer in Little Kelk. My first sighting of one of these beauties as a young lad was part reason for getting me into birdwatching. 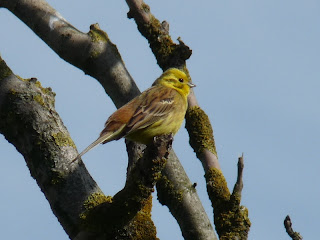 Linnets on barbed wires. The males a relatively understated for a finch but no less lovely for it. 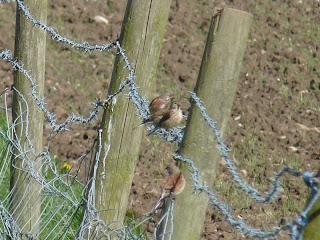 You're going to have to trust me but this is a Willow Warbler. This view was looking toward sun - though you'd be forgiven for thinking it was dusk! I love the somewhat chilled out vibe to their song. 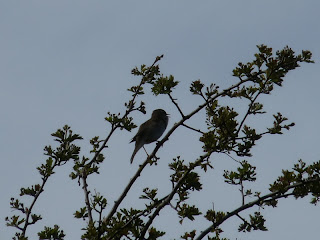 Gadwall seem to pass through the area regularly every spring, mostly at regular spots like Brigham Quarry or along Kelk Beck, unlike this pair which were at Lowthorpe Bridge - my first record for that spot. 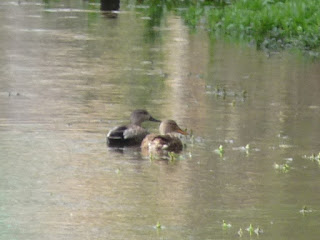 Finally - the odd looking Jackdaw at Harpham, possibly a continental bird. The resident birds typically have a less contrasting pattern around the head and the almost white collar-line is thought to be consistent in continental birds. Popular thinking is that the overlap between the subspecies/races makes safe identification in the field near impossible. And then there's the problem of subspecies hybrids and intergrades. On the positive side, small numbers of continental Jackdaws must, surely, occur in the area, even if we can't properly identify the buggers. Whatever, this was a really striking little chap compared to more drab normal ones. 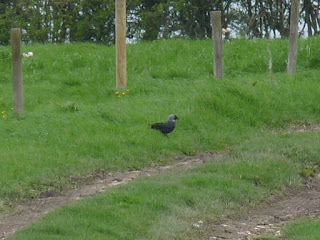 Well ok it still is drought, according to the boffins, but you wouldn't have known it. The weather at the weekend had it all... cold and windy, rain and more rain, then spectacular spring sunshine on Monday.

Even so, I managed to notch up my first April records of Swift and Hobby and a few other year ticks to boot. Review later, just a few snaps now.

First - Herring Gulls at Gembling. The wet weather has caused the drain to flood the same fields as in the crazy flood in summer 2009. 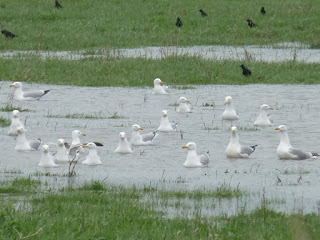 And here is the same flood as in the picture above. There is no mud since it's been dry all winter so it may not attract waders but I shall be watching this with expectation anyway. 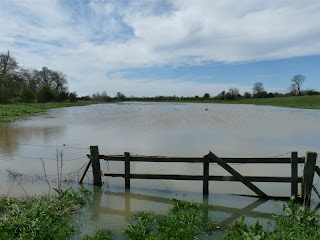 Spring time! A lovely big patch of Cowslips in Kelk. 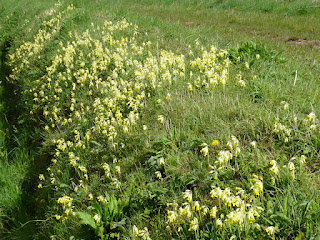 Is it a bird? Er, no it's plastic immitation pigeons. I did a double-take at first then just as I clicked I spotted a rather non-plussed but well camouflaged shooter lurking in the hedge. Doh! 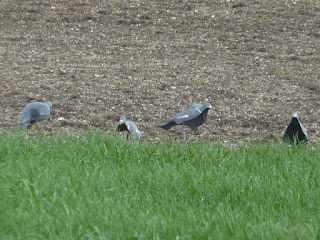