Like I was saying, not a particularly eventful visit last weekend. But more of that later, instead here's a few more photos. 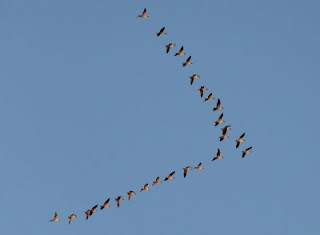 Greylags doing their best to look like wild geese. You're fooling no-one. 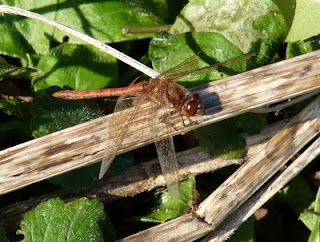 Now here's a surprise - a Common Darter. Don't think I've ever encountered one of these in November. This one was near Harpham, a good spot for this species. 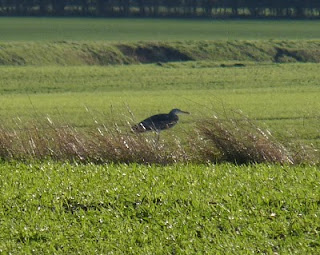 A young Grey Heron standing horizontally into the wind. No doubt it'd have been blown into the next field if it had tried to adopt the typical vertical pose. Looks kinda weird, doesn't it? 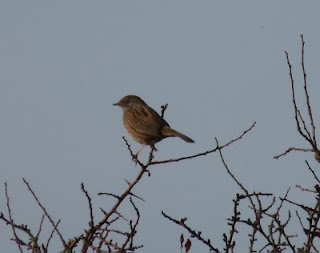 Dunnock or what most folk still call Hedge Sparrow. Not a bird that many people spend time looking at but I think they're delightful. They're common enough but a bit skulky so not as obvious as other garden birds such as Blackbird. This particular one was being very territorial along Kelk Beck. 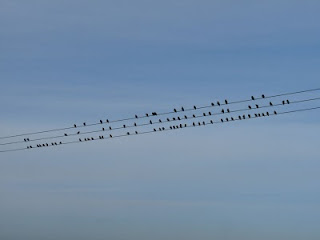 Bit of a common birds theme developing, here's some Starlings. I had toyed with the idea of Photoshopping this to spell out rude words but that would be childish. Another day perhaps. Starlings love these wires as they provide a view across many of the gardens in Little Kelk.
Posted by Bob at 17:20 No comments:

Last weekend's visit was a game of two halves if ever there was one. For the most part distinctly ordinary and uneventful, with one major exception.

I'll review the remainder later but here's some detail on the biggie: a ROUGH-LEGGED BUZZARD. The bird was present in rough ground adjacent to Kelk Beck on Sunday morning - we watched it for around 20 minutes. In that time it only flew a couple of times spending most of the time on the ground, occasionally hopping about - perhaps looking for voles? Unlike most raptors this one did not seem at all bothered by our presence and at one point we were about 40-50m away.

This photo shows the characteristic underside pattern - dark 'elbows' and a solid dark belly against otherwise pale underparts - both features of a juvenile RLB. The white patches on the wings are also typical. 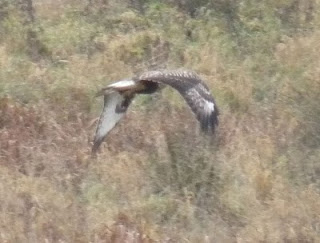 Wow - look at that tail. Although some Common Buzzards show white in the tail the band would not be this well defined especially combined with the features noted above. Solid band also indicates a juvenile bird, adults tend to show multiple bands. 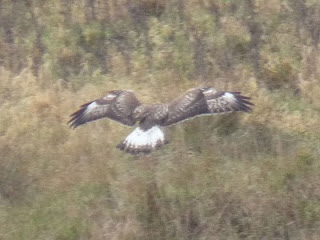 On the ground the pale head was striking, even with the naked eye. You can make out the white tail band here. A pale Common Buzzard would not show such contrast between pale and the brown body. 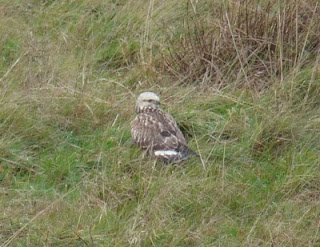 Another shot on the ground. Again note the striking pale head, but also the pale throat and bib - another feature of juvenile birds. 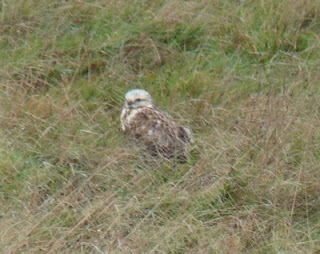 Finally, this was actually the first shot I took, in a frantic attempt to get it on record in case it flew off immediately. It's harder to get an identification on this view as it's facing away, you can't see the tail and the head doesn't look so pale. What would raise the alarm for me in this photo is how uncommon it is to see Common Buzzards perched on the ground, especially at such close range. The bird had actually flown over us and landed here just before this shot was taken - I was already happy with the identification by the time the camera was ready, give or take shaking with excitement! 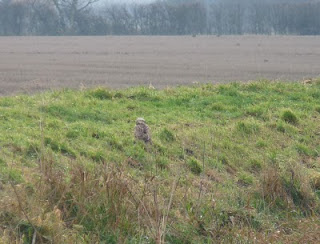 Rough-legged Buzzards are scarce visitors to the UK, with less than half a dozen in Yorkshire in a typical year - most of those either along the coast or in moorland. Two winters ago three birds were present in the dry valleys around Millington.

In 2010 a national influx (late October) has taken place with dozens of birds noted along the coast from Scotland to Kent. Locally birds have been seen at Barmston, Tophill Low, Leven and Hornsea Mere.

During summer these birds are in the Scandinavian arctic where they feed largely on lemmings. Winter forces them down into Europe but it takes extra pressure to push them across the North Sea - such as a lack of small mammals in southern Scandinavia.
Posted by Bob at 13:25 2 comments:

October briefly. It was the weekend of 23rd and 24th. Weather mostly rubbish. Highlights were few and far between. The first record of tree roosting Cormorant was to put it mildly, a surprise. On Sunday a Water Rail made bird-of-the-weekend with a supporting cast of Green Sandpiper, Kingfisher, and Grey Wagtail.

Approx 200 Black-headed and 800 Common Gull during the day.

Harpham (pm): not much new but 40+ Pheasant wandering around in one field, 1 Little Grebe on the beck, 1 Grey Heron, 4 Sparrowhawk, 1 Great Spotted Woodpecker, 1 Grey Wagtail, 3 Goldcrest, 15+ Long-tailed Tit, and 32 Linnet.

Green Lane (eve): 1 Greylag, 22 Mallard, 1 Grey Partridge, 8 Cormorant roosting in trees at Kelk Lake, and 1 Kestrel. A total of 33 Hares were in fields either side of the lane. Around 1100 Common Gull moved through to roost with c1500 Corvid going in the other direction to Lingholmes Plantation.

And finally a quick look at some deeply ropey photos. 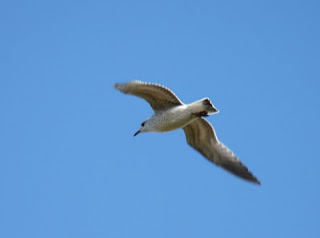 A young Common Gull, born this summer, probably in Scotland or northern Europe. The intensive arable areas of Holderness and the Yorkshire Wolds are one of the most important regions in the UK for wintering Common Gulls. 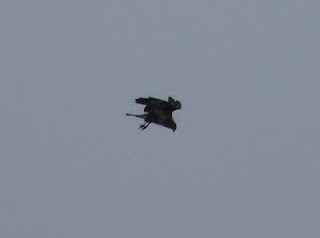 Looks like a Marsh Harrier at first glance, but no, it's just a Common Buzzard caught in an odd pose. 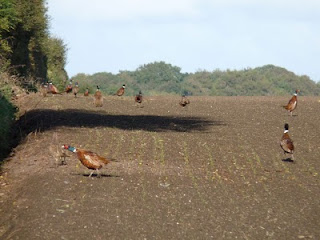 Beware men with guns! They don't look well prepared for what is to come, do they? 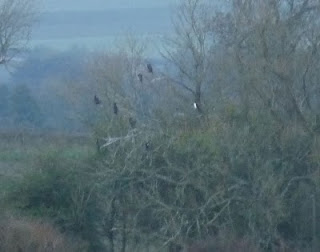 Well would you have it - tree roosting Cormorants. A first for the area. I didn't make an evening visit in September and didn't see these earlier in the year. The photo above, taken at great distance, appears to shows a fair amount of poop on the branches so they've probably been doing this for a short while. My hastily put together but fairly obvious theory is that these birds are all using Kelk Beck to feed in during the day and have discovered a new place to roost much nicer than out to sea and closer than either Tophill or Hornsea Mere. To put this in context, the previous maximum day count in the area is 7. 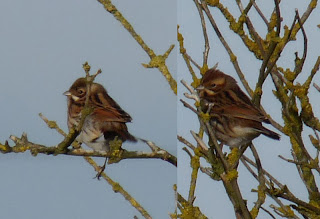 Last but not least a composite study of two Reed Buntings. On the left a typical 'female' bird, though the amount of black suggests a young male. On the right a superficially similar bird but look closely and note the chestnut rather than black cap, likely indicative of a young female.
Posted by Bob at 22:46 No comments: