Return of the Egret

This corking Little Egret was the singing fat lady of last weekend. It was in a field drain near Kelk Beck at dusk on Sunday. Not far from where I saw one last January and February. You have to wonder - same one or not? And how many more must there be hiding away in the mass of Holderness drainage channels? 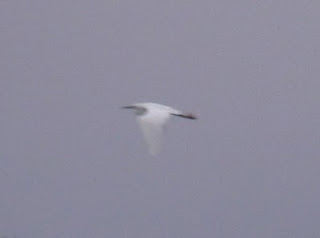 Either way, they're still far from regular here yet - this is still only my fourth sighting relating to either two or three individuals. No doubt they will become more regular as their expansion continues.

Other goodies from the weekend: 91 Pink-footed Goose flying north, a Goldeneye, a Water Rail, 4 Woodcock, 2 Green Sandpiper. Three Barn Owls were most welcome after the doom-laden reports coming from elsewhere.

Before I get 2011 up and running - next weekend hopefully - here's a recap on last year.

Snow began and ended the year and January sightings reflected these extraordinary conditions - my first Bittern and second Little Egret along with Merlin, Peregrine, Water Rail, a couple of Green Sandpipers, several Woodcock and the only Brambling of the year. February was quieter though the Little Egret put in another appearance and a Jack Snipe was by Kelk Beck. Two Goldeneye at Kelk Lake was a good record.

By late March the awful winter was no more, quite the opposite in fact. An early Swallow was noted on 28th - my earliest locally. Two Sand Martin passed through on 27th, though that's a fairly typical date. Several Chiffchaff were already in. 480 Golden Plover resting in a field in Little Kelk is a record count and continues a trend of flocks staging before migration in spring - we get very few in winter. By far the best sighting was the Osprey heading north - my second following one last April.

Spring migration was in full effect in April including useful sightings of Yellow Wagtail, a White Wagtail (continental subspecies of Pied Wagtail), an unseasonal Peregrine, and 75 of the Golden Plover still hanging around. The raptor theme continued with a Red Kite drifting north west.

More migration in May with a Grasshopper Warbler at Harpham and a Ruddy Shelduck at Gembling. Warblers were generally well represented with a very high number of Common Whitethroat, though only a couple of Lesser Whitethroat.

June and July were very quiet. Welcome sightings included one each of Corn Bunting and Spotted Flycatcher, both at Foston. Hobby's appear to have bred at Kelk though no young were seen to confirm this.

More Spotted Flycatchers in August, two together at Lowthorpe, was very encouraging. Not a lot else going on in August though the local Buzzards seemed to have had a good year - seven soaring together over Harpham was a beautiful sight. It was not a good year for butterflys though 4+ Brown Argus at Harpham represented a new species for me locally.

September turned up a massive surprise in the form of a Long-eared Owl. Not just a difficult species to observe but thought to be genuinely scarce in the region. Elsewhere two lots of Pink-footed Geese were noted (40+ south, 4 stood in a field), a Great Black-backed Gull was a first for the year, and another Spotted Flycatcher was seen at Lowthorpe.

October didn't produce much of note - a Water Rail being the best. Tree-roosting Cormorants were discovered at Kelk Lake in October, the first such recorded locally. They were there again in November, up to 8 birds. Also in November were a Goldeneye at Kelk Lake and 19 Siskin flying south. A national influx of Rough-legged Buzzards deposited one in our area - a really cracking bird and one kind enough to let me take a few photos.

December ended the year as it had begun - under a covering of snow. More Woodcock and Water Rail were not such a surprise, but it was a delight to have two Whooper Swan fly over.