It's nearly spring, isn't it? A proverbial game of two halves this weekend. Warm sunshine hinting at the months ahead on Sunday morning but when the northerly breeze got up and the clouds came it was most definitely still February.

As for the birds, there was nothing much to raise the heartrate though it was good to hear plenty of early bird song and the recent rain has left patches of water that could prove interesting going into spring. Highlights were; 14 Wigeon, 140+ Teal, 3 Oystercatcher, 300+ Lapwing, 1 Green Sandpiper, 3 Treecreeper.

Green Lane: another look at the floodwater on the pasture revealed 89 Teal, 8 Wigeon, 1 Oystercatcher, plus 7 Buzzards in the air over the woods.

And now for some photos. Relative close up of some Teal, the males are really smart little fellas when you see the detail. They love shallow flood water on grass. 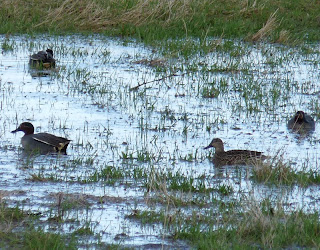 More teal. And two Wigeon. Oh, and an Oystercatcher. These are all on a small patch of water in Kelk that regularly forms in one of the pastures, though it's never really attracted more than a few Teal before. 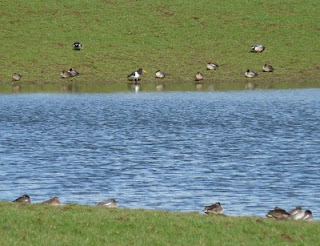 I think I've been spotted. Love the colours on the back and greyish neck. 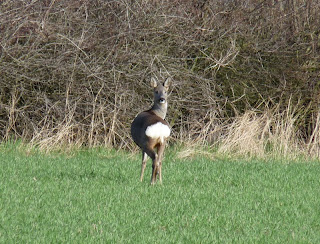 All five Roe Deer crossing the next field, making heavy going across the newly ploughed ground. Oddly, they didn't seem too spooked by my clumsy attempt to get a good view. 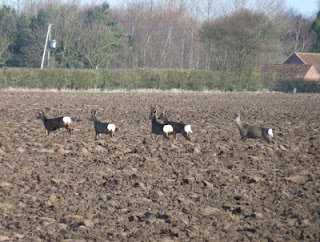 And speaking of not being scared, Mute Swans appear to have no concept of Scarecrows being dead scary. Not even ones dressed as Police. Mute Swans don't get out of water much around here, pretty much the only time they do seems to be to munch on oilseed. 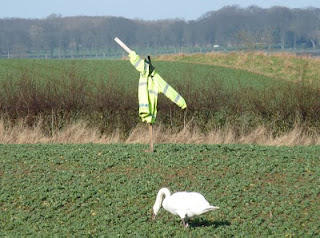 Yearlist creeps up slowly to a very modest 71 (compared to 80 last Feb).

Lazy me. It's taken me a couple of years but I have finally added a few links to local birding blogs and web sites - motivated partly by the recent appearance of the East Yorks Birding forum here. I'm sure there's others and I'll add them eventually.

No actual bird news to report.
Posted by Bob at 12:18 No comments:

Heck, February already. Time for a brief summary from January and a few photos.

Taking a day off work paid off - Friday was by far the best birding weather. Or at least the morning was. A skein of 91 Pink-footed Geese flew north over Harpham but otherwise is was fairly predictable. It was comforting to get Treecreeper on the to the yearlist so early - I had to wait until November a couple of years ago!

Bleak weather has clearly pushed many birds out of the countryside - the woods in particular were at times silent, even the hedgerows hid little. Surviving Barn Owls were out an about in the afternoon, one each in Kelk and Gembling. At least 1500 Corvids moved to the roost at 5pm.

Around Kelk Beck a Water Rail was welcome, though almost familiar after a good year for them. Once again it was very quiet but 123 Mallard were around Cattleholmes and a 'herd' of 11 Mute Swan were feeding on an oilseed field - not at all a typical sight here. Two Green Sandpiper and another Barn Owl were the best of the rest. Afternoon was lacklustre - 18 Yellowhammer was a welcome sized flock of this declining species.

Another crack and Lowthorpe and Harpham revealed little new and the afternoon around Gembling wasn't much better. A quick look at Kelk Lake revealed single Goldeneye, Pochard, Tufted Duck and 4 Coot - all last minute year ticks!

For reasons I can't explain I have a track record of getting a good bird right at the bell. And so it was - the Little Egret in a drain near Kelk Beck just as I was heading back to base at dusk, almost literally the last bird seen of any species. 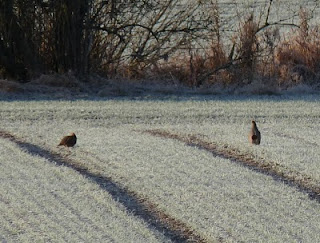 A pair of Grey Partridge looking splendid in the frosty morning sunshine. 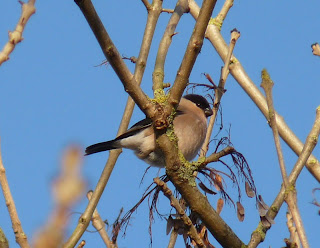 Bullfinches are splendid little birds. This female was one of four eating Ash keys.
. 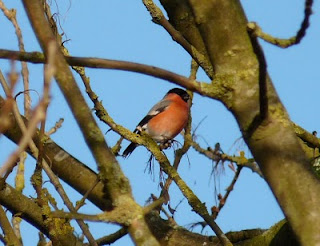 Fine as the females are, it's the male that stands out.
. 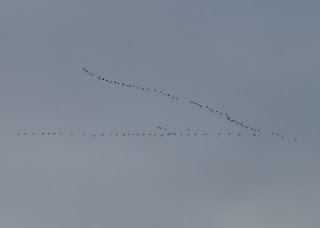 Apparently this skein had already flown right along the line of houses in Kelk before they went over my head at Harpham. Always a superb sight. 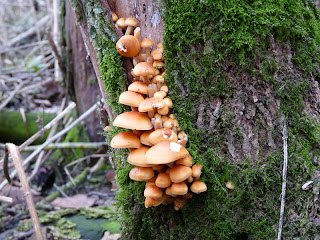