No no no, not the new electoral map of England. A blue butterfly. Much nicer than all this unpleasantness they call politics :)

My visit for May was last weekend but I'm busy so this is a filler post until there's time for a proper report. I made nearly a dozen additions to the year list including a brief singing Grasshopper Warbler at Harpham - my first since the 1990s. Hurrah!

The picture below is a Holly Blue, at Harpham. Holly Blues are regular but uncommon in the area. Even by butterfly standards they're spectacularly beautiful - not that this woeful picture is going to convince anyone. 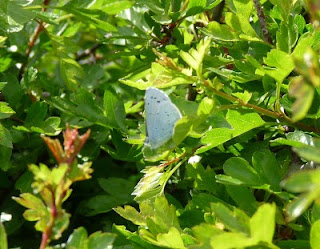 This evening I was looking through some books and a piece of paper fell out of the middle of one. On it were some handwritten notes of a visit to the Kelk area 11th-14th April 2004.

Why is that interesting? Huh? Well it isn't really but it predates my blog and it's a good excuse to fill a gap here before my next visit. Ha!

I used to live in Kelk in the early 1990s and was out in the field every day which means I have a fair chunk of data to help me put in context current records. However after moving to Liverpool my birding petered out while I spent ever more time doing the daft things people who live in cities do - mostly being indoors a lot and going to bed at the wrong end of the day. Fortunately the birding bug caught up with me again in the mid-noughties and from January 2007 I promised myself one visit a month. So that's where we are today. But my inner nerd gets very annoyed now by the missing decade. Data gap! Noooo!

11th - at Kelk Lake a displaying pair of Great Crested Grebe, 2 very late Goldeneye, a pair of Ruddy Duck (the last pair were in 2005 - none since), 1 Curlew and 1 Redshank. Elsewhere a Kingfisher at Harpham, several Swallows, a male Wheatear in Kelk, and 2 Treecreeper at Harpham.

12th - much the same at Kelk Lake again plus 2 Oystercatcher, 2 Shelduck. Nothing notable elsewhere.

13th - at Kelk Lake 2 Teal, pair of Sparrowhawk, 2 Redshank, 1 Coal Tit (haven't noted one here since). At Brigham Quarry were 2 Gadwall, 2 Pochard, 3 Oystercatcher, 2 Willow Warbler. An extraordinary flock of c450 Golden Plover were at the south end of Kelk in the evening - see my March post for more about spring Goldies 'swallow-not-summer'

14th - only managed a quick visit to Kelk Lake but the grebes were still displaying, one of the Goldeneye was still there, as were the pair of Shelduck and Oystercatcher.

A Cuckoo has been regular around Kelk and a Marsh Harrier was near Gransmoor yesterday morning, and a 'probable' Marsh Harrier near Barf Hill late afternoon. 'Not many' is the verdict on the number of Swallows - perhaps they're spending more time away from nest sites due to the colder weather.

Can't wait to get back across, May is my favourite month for birding but painful knowing that every day you're probably missing some good birds. Gah!
Posted by Bob at 00:40 No comments: