A few photos from the weekend. Too breezy, too rainy, not enough birds showing etc. But enough with the lousy excuses. ;0)

First up a Common Blue at Harpham. This is the first one in the last two years, clearly they're not finding much suitable habitat - such as unimproved grassland. 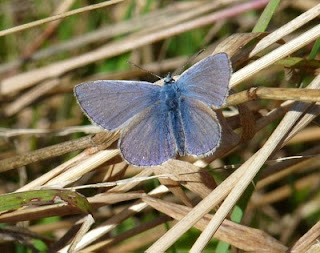 A female or young Kestrel in familiar hunting mode. You can't properly see here but it was hovering barely above head height. 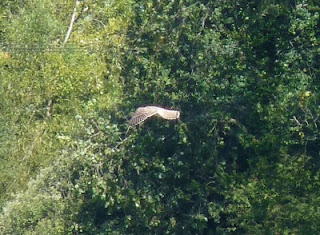 Juvenile Great Crested Grebe at Kelk Lake. It had been actively feeding before I got my camera out, then decided to have a nap. 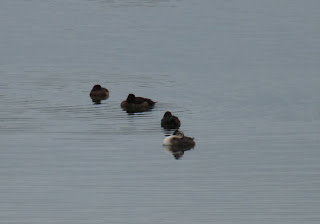 From biggest to smallest on the grebeometer - 3 Little Grebes together on Kelk Beck. Two or three pairs breed along the beck but it's not the easiest place to see them. 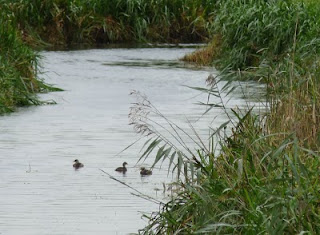 Unexpected goose action! Four grounded Pink-footed Geese in Little Kelk. A few migrating skeins of pink-feet will move through in the next couple of months but very few birds will touch down. I think these are the earliest I've seen in Kelk. 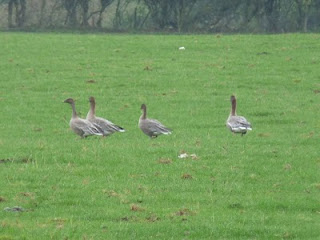 And there we have it. Summer moves into autumn. Bring on October!
Posted by Bob at 20:26 No comments:

A tale of two halves. Summer. Autumn. Saturday was good, Sunday spoilt by constant rain. Highlights were a first LONG-EARED OWL for nearly two decades, a Great Black-backed Gull was new for the year. Also rans; 40+ Pink-footed Geese, a Great Crested Grebe, a Yellow Wagtail, a Coal Tit and a Spotted Flycatcher.

Surprise of the morning, weekend, and pretty much the whole year so far was a LONG-EARED OWL in Lingholmes Plantation. The bird was flushed at the edge of the wood and flew into the thicket, just enough to get a positive ID but not enough to really enjoy such an elusive bird. Significantly this is only the second or third one I've seen in the area - several sightings in winter 1991/2 were thought to be two different birds but could have been just one. September seems a very early time for a migrant but the alternative, a local resident bird, seems equally unlikely. Could the location be a clue - roosting next to a path - to it being new to the area?

A Common Buzzard was hunting around Green Lane about 6.30pm. Later were c40 Pink-footed Geese flying south along Kelk Beck at dusk while approx 300 Rook and 600 Jackdaw went to roost. A Tawny Owl was heard after dark.

Not many Swallows around, perhaps high double figures over the day, I guess many moved out in the last week or so. No Sand Martins seen all weekend and only a handful of House Martins.

Nothing doing in the morning due to other commitments and the afternoon was almost rained off. However I braved Kelk Beck and managed to find; 4 Mute Swan, 65 Teal and 75 Mallard at Cattleholmes, 3 Little Grebe, 3 Cormorant, 7 Grey Heron, 1 Common Buzzard, 62 Lapwing, 1 Snipe, 4 Green Sandpiper, 3 Meadow Pipit, 1 Grey Wagtail (first since last winter!), 21 Long-tailed Tit, 20 Chaffinch, 30 Goldfinch and 2 Reed Bunting.

Last throw of the dice was a quick scan over the grass fields in Little Kelk. Nothing except more rain. Oh, wait, hang on, there's 4 Pink-footed Geese in among the sheep. Huh? One can only guess they were decked by the rain. Photo to follow.

Aside from birds there's very little to report except a Squirrel at Lingholmes, 2 Roe Deer. Butterflies were only seen on Saturday and little variety to note, just 10 Speckled Wood, 3 Small Tortoiseshell, and 'low double figures' of Whites. There was one big surprise though - a Common Blue at Harpham - the first of the year (none seen last year).