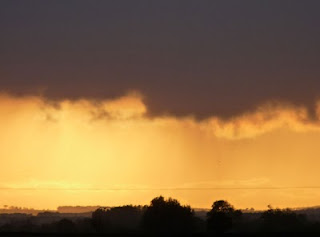 No doubting autumn is here... Brrr!!

A full review of the weekend will appear later but in short there was not a great deal to report. The weather was downright silly, as can be seen in the photo. Most of Saturday was rained off, otherwise the wind just made it hard work. But then that is autumn, really.

Best bird was a Water Rail by Kelk Beck. An elusive species at the best of times but especially so this early in the winter. Also a Green Sandpiper, Kingfisher and Grey Wagtail.

Thrushes were notable by their absence, though a couple of small parties of Fieldfare and Redwing were tracked down, just. Local hedgerows can be weighed down by arriving Blackbirds at this time of year but they're either not here yet or have already moved on.
Posted by Bob at 15:41 No comments: