If you blink in September, as a birder, you miss the action. This weekend had that feel to it but with only two days to play with I had to grin and bear it. Ultimately however there was scant evidence of migrants but a couple of Hobbies, a Marsh Harrier, Spotted Flycatcher, and Corn Bunting were some reward. Two Swifts represent a late sighting and - hence the title - a new record area count of 11 Common Buzzards reflects their continuing success locally.

Butterflies were out in the sheltered sunshine in small numbers; 16 Whites, 11 Small Tortoiseshell, 8 Red Admiral, 6 Speckled Wood. Also 6 Hawkers, presumably Migrant Hawker. A young Roe Deer was on its own in Lowthorpe Church wood and a small/young dead Grass Snake was by the roadside in Kelk.

Below is the Spotted flycatcher busy feeding in the shelter of Lowthorpe churchyard. I had one here last September as well as in previous years. Perfect habitat, but curiously no sign of them in mid-summer. 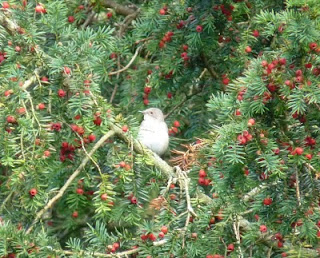 Many people struggle with Hobby identification - not least because they're tricky to study and become familiar with. In silhouette the shape is distinctive - thin rakish wings and a relatively short tail (cf Kestrel). In hunting flight their wings often appear pulled back and scythe or anchor like. Although you can't make it out from the photo this one is a juvenile - quite possibly raised locally. I'm just chuffed to get a photo at all!! 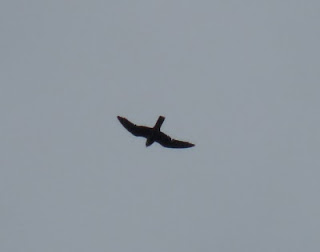 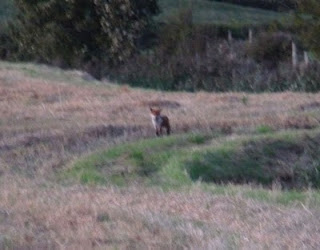 As yesterday small numbers of butterflies were out and about - 16 Small Tortoiseshell, 11 Whites, 5 Red Admiral, 3 Speckled Wood. A single Migrant Hawker was along Lynesykes.

Juvenile Grey Herons were evident all weekend, perhaps a sign of a good breeding season. The adults, typically, were nowhere to be seen. 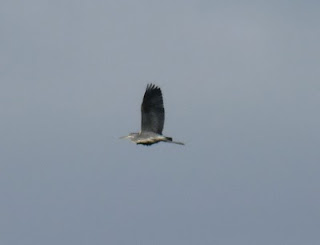 Of the three regular big gulls the Great Black-backed is the least encountered around Kelk. Mostly seen in winter a typical sighting would be a few individuals moving south-west in strong winds accompanying Herring Gulls perhaps to the roost at Tophill Low or even further crossing the Wolds to the Lower Derwent. What one doesn't expect is to see several on the ground together. This freshly drilled field at Gransmoor hosted five of the brutes. 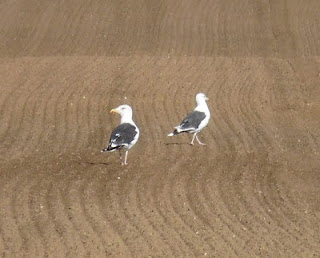 Despite the lack of classic autumn birds it will come thick and fast from now on. Next month only stragglers from summer will be left and winter thrushes arriving en masse. Brrr!

The only year-tick of the weekend was the migrating Siskin. Still a way to go compared to the last couple of years.