Review for my most recent visit. Raptors was the theme, including lots of Buzzards, Marsh Harrier finally making an appearance and a surprise young Merlin! The backup cast included several Kestrel, Sparrowhawk, and a couple of Hobbies.

Buzzards everywhere enjoying the lovely weather. This adult is in the middle of wing moult - the uneven wing feathers are at different growth stages and the outermost feather on both wings are half-grown. 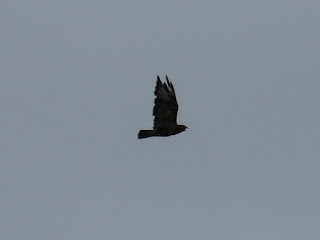 Merlin, if you squint a bit. Not an easy bird to see at any time of year in the area and most unexpected in July. I think it was a juvenile but wasn't 100% sure. 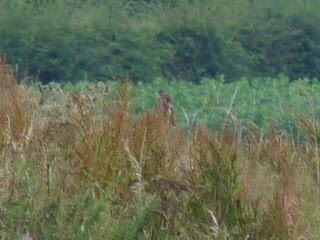 Female Marsh Harrier on partol. Surprisingly this was my first sighting this year. 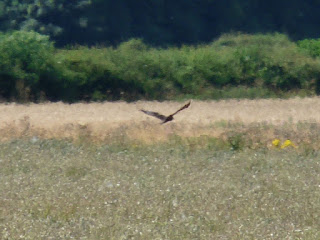 Meadow Pipits probably bred this year. Two birds were being very territorial. Despite being very common in other parts of the country they are really only passage migrants here, with breeding happening only irregularly. 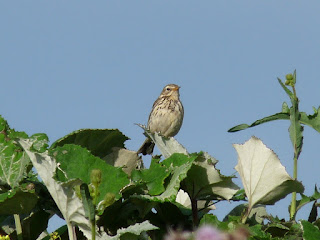 The swan family. This is from Lowthorpe road bridge, over a mile from the nest. 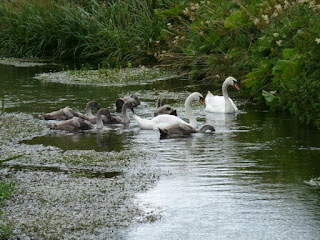 Along with the Quail mentioned in a previous post the year list is now up to a respectable 104 and a final total of between 110-115 seems likely.

The heronry contained a very unusual 'all dark' bird in June. I thought it was worth making a separate note out of this oddity rather than include it in the June summary.

Birds at the heronry were not especially visible during my visit, with about 12 counted. While I was there the completely dark bird (a juvenile? weird plumages often seem to be) flew in from the north and landed in one of the trees, close to a typical adult.

It wasn't black as such, but a weird super deep blue/purple. As far as I could tell it's whole plumage was uniform.

A really rubbish photo below. Birds are distant so it's the best I could do! 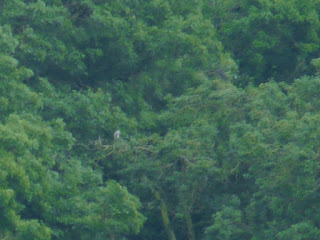 And again with the addition of pointers... 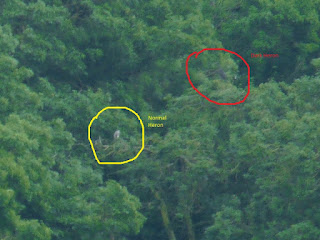 Very strange. I've certainly never seen a heron like this before. Hopfully it will survive a while and hang around the beck so I can get a better look at it / photo.

Another brief summary, of June. As you would expect for summer there was not a lot going on. The highlight was probably two sightings of Hobby hunting (my hunch is two birds rather than one but who knows) after missing out in May.

As much as summer is about new life coming in to the world, for birds of prey that means taking the lives of other animals. In this case presumably a Woodpigeon making a big meal for a Sparrowhawk. 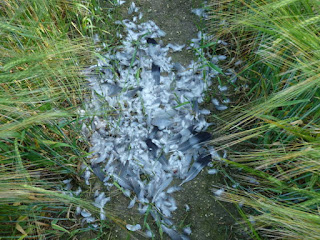 Only one addition to the yearlist.

Briefly account for May. It mostly involved catching up with spring migrants, the highlight being a Turtle Dove for the second year in a row. 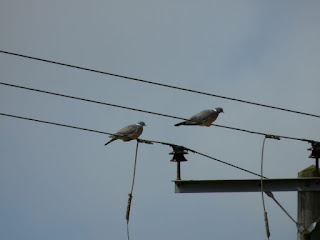